The amount of capital available on the sidelines to invest in private companies, however, has never been greater
The core principles that built the original GCR organization still resonate today
Listen to Cole Strandberg's weekly podcast, The Collision Vision.
The market for small-to-medium company mergers and acquisitions may be down in 2023, but it’s definitely not out.
After losing more than 25% in our fall report, the FOCUS Communications Service Provider Index (CSPI) turned things around and managed to deliver a three-month gain of 10.0%. This was better than the three-month gain for the S&P 500 of 7.1% and far superior to the 1.0% loss in the NASDAQ. Even so, the CSPI’s year-over-year performance remains dismal with a drop of 34.3%. This underperformed both the 19.4% loss in the S&P 500 as well as the 33.1% drop in the NASDAQ over the 12-month period. Sub sector multiples also dropped considerably compared to this time last year, falling from 2.7x revenue and 7.6x EBITDA a year ago to 2.2x revenue and 6.2x EBITDA currently. 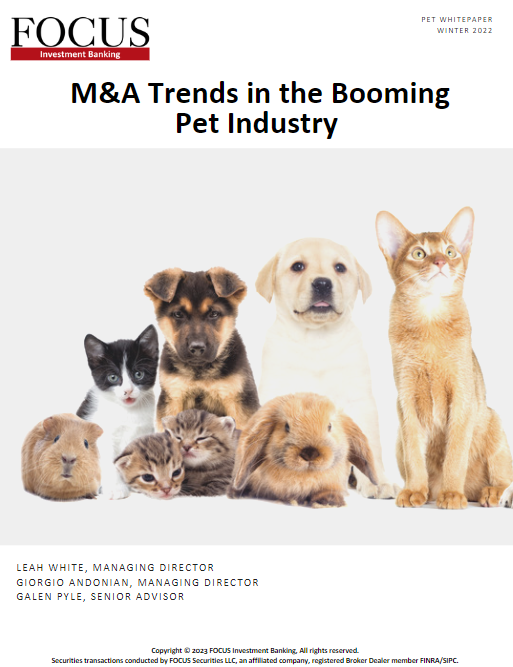 The global pet industry has grown dramatically in recent years, despite the downturn in the world economy, driven by increased adoption rates, humanization trends among owners, and e-commerce penetration. The industry has proven to be largely recession-resistant while underlying trends support continued growth in the future, regardless of overall economic conditions.
Owners of small-to-medium sized firms thinking about selling are often privately worried that their business won’t attract what they believe it is really worth.
As the Federal Reserve continues to tighten monetary policy to try to control inflation, two things could happen.
As you become older, time becomes more important than money. And as you become even older still, health is number one, while time and money fall to second and third.
Many people say they have been in the tire business their entire lives because they spent a majority of their life in the industry.