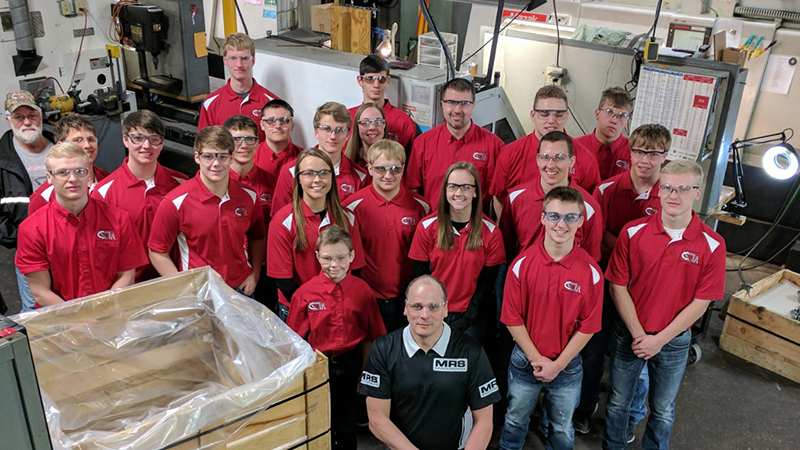 If your precision metalworking shop is looking to hire your next machinist—and we know what short supply these technicians are in— your local middle school or high school might be an appropriate place to look. That is if they have their own student-run machine shop business in place. And if they don't, maybe your company can help them get one started.

We believe the model for this is Cardinal Manufacturing in Wisconsin. The program is the brainchild of Craig Cegielski, who has been doing this at the Eleva-Strum High School in rural Strum, Wisconsin (population 1,114) since 2005. He started a similar program in Antigo, WI, in 1998. We were so impressed with the Cardinal story that we sat down—virtually—with Cegielski to learn more about it and how programs like it might be able to help our many clients and contacts in the precision machining business.

Cardinal is a student-run machine shop run through the school’s tech-ed department. The company takes orders, fills them, and makes a profit—which the students share in—just like regular businesses do, although it doesn’t compete with them. Rather, it takes on small, short-run, lower tolerance jobs that bigger shops don’t want. According to Cegielski, Cardinal hasn’t had to look for work since it started—orders come to them, usually by word of mouth. A long-time partner, client and supporter of Cardinal is M.R.S. Machining Co., a family-owned manufacturing company in Augusta, Wisconsin. The company provides precision machining services to the oil & gas, aerospace, energy, medical, food service, and industrial products industries.  The company has been named a Top Ten Machine Shop by American Machinist magazine and a TOP SHOP by Modern Machine Shop. Now headed by President Matt Guse and his wife Vicki, MRS’s affiliation with Cardinal dates back to Matt’s father, Roger, who founded MRS in his garage in 1986. The elder Guse was an early supporter, donating machines, money, and his time to Cardinal. MRS has since hired several Cardinal graduates, full-timers as well as part-timers and summer help.

In addition to MRS, Cardinal boasts a large roster of supporters and donors, including the Koch Foundation and Ashley Furniture, among others. What’s particularly impressive about Cardinal is that the program only has 22 student workers, who only work about an hour and a half a day. Since most of them are seniors, that means there is nearly 100% turnover of the workforce every year. The school itself only has about 160 students, graduating about 40 every year. Students must apply and be accepted to be part of the program. In addition to a share of Cardinal’s profits, they also earn two academic credits. According to Cegielski, Cardinal is a win-win for all concerned—the students, the school, local machine shops, and other schools and machine shops looking to replicate its success. Indeed, it has a constant flow of people coming in from around the country to inspect and learn about the program.

“A student-run manufacturing company provides cash flow, which can be used to build a better facility with modern equipment,” Cegielski told FOCUS. “That provides a real attachment for some students to their school, not unlike playing sports. It makes school way more relevant. We give the kids a really good high school manufacturing experience that encompasses employability skills and professionalism, in addition to technical skills, then we send them out with a huge scholarship package, so they are going off to be successful.”

In addition to learning technical skills like running machines, students take on the whole gamut of running a business, such as meeting with customers, taking orders, solving problems, invoicing and shipping, accounting, marketing, and everything else. In other words, professional and employability skills that they will need the rest of their lives no matter what field they choose to enter.

“We try to set the foundation here, and then they can go off for further training and find their way to their unique careers,” Cegielski says. “We have high expectations, and the kids perform.” Indeed, according to Guse—who has two Cardinal alumni currently working full-time at his company, both in their early 20’s—those “soft skills” are just as, if not more, important than the actual technical skills involved in running sophisticated modern machines like computer numerical controlled (CNC) machines. “The soft skills they learn in high school make teaching the hard skills easy,” he told us.

He also sees it as a way for machine shops around the country to replace their aging workforces and get young people interested in careers in machining. We agree. “My goal is to have more people in machining, but I don't just look for machinists,” Guse says. “I also look for quality control staff, maintenance, even office people. If I meet a student who says he's from Cardinal, my next words are, ‘When can you start?’”  In addition to Cardinal, he works with other similar programs, such as Tiger Manufacturing at Webster High School in Webster, WI, and Eagle Manufacturing at Brown County High School in Nashville, Indiana.

Guse notes that his partnership with Cardinal is a big reason why the average age of a machinist at his company is an enviable 32, compared to the industry average of 58. “I don't think you'll find that in many shops,” he says. MRS currently employs 28 machinists.  Cegielski suggests that programs like Cardinal could be the answer to the growing shortage of qualified machinists. If the local high school doesn’t have such a program, local manufacturing firms should consider getting the ball rolling themselves. It’s also not too early to start students off in middle school. “The kids are there, they can't leave,” he notes. “You have them, but you’ve got to go in and get them hooked at that age. It's too late once they go to college.” “Everyone has gifts and talents, we just need to help them find them,” Guse says. “Showing them what manufacturing careers can do will help build confidence in people and help solve some of the issues we have in the industry today.”

If you’re as excited about the Cardinal Manufacturing concept as we are, we encourage you to get in touch with Craig Cegielski to learn more about it and how you can set up a similar program in your area. Or you can get in touch with me at john.slater@focusbankers.com or 901-230-5062.