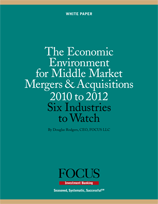 In 2010, global M&A activity increased for the first year since 2007. According to Mergermarket, the 2010 economic environment led to a worldwide increase in M&A transactions by 14 percent with the value of these transactions increasing 20 percent over 2009. For the same period, U.S. M&A transactions total value increased by 10 percent.

Additionally, Thomson Reuters reports that 2010 worldwide M&A volume was $2.23 trillion, which was 47 percent below the peak of $4.28 trillion in 2007. However, Thomson Reuters expects a robust 36 percent increase to $3.04 trillion in 2011. The 47 percent drop from peak to valley was largely a reflection of the decline in the number of transactions, but more so due to a dramatic decline in the number of large transactions during the period.