Here’s a little history lesson for the young people. Bridgestone Corp. was not always the largest tire company in the world. The acquisition of Firestone Tire & Rubber Co. in 1988 helped make it the largest.

Initially, the deal did not include the Firestone stores, but to outbid a combined offer from Pirelli & Cie SpA and Groupe Michelin, Bridgestone upped its offer and had to take the stores as well as the factories. Once viewed as an afterthought, the stores would eventually help make Bridgestone the market share leader.

Business is tough today. It’s nice to have multiple reasons to be in any industry. Controlled distribution offers manufacturers multiple, profitable reasons, and Bridgestone is the best example of how well this can work.

In looking at the U.S. replacement passenger tire market share in 1988, industry leader Goodyear Tire & Rubber Co. held a 16% share with its Goodyear brand alone, versus 10.5% for a combined Bridgestone brand (2%) and Firestone brand (8.5%). Thirty years later that has flipped.

The chart below illustrates the change in each company’s store count over the same time period. I believe it’s no coincidence Bridgestone’s market share went up as its company-owned store count — aka controlled distribution — increased, while Goodyear’s brand share decreased as its store count dropped significantly. Goodyear’ share is now 12%, while Bridgestone and Firestone are a combined 14% with 7% each. Bridgestone/Firestone’s profit also improved over time as the mix shifted in the stores to higher ticket, higher margin Bridgestone product.

Undertaking this is not for the lighthearted. Bridgestone had to learn how to manage channel conflict, and the key person they chose to do this was tire industry legend John Gamauf, who got his start in those Firestone stores. Gamauf created the Affiliated Dealer program, which became part of the “family channel” in which certain “fighting products” like Dayton, Road King and Peerless were dedicated to the dealers and Triumph and Lemans went to the stores. Next, he created area-marketing rules that applied in metro and rural markets for existing and new locations and a conflict resolution methodology for when problems arose. 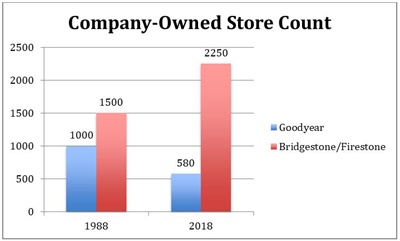 Additionally, greater support was given to dealers who committed to a greater in-house share of Bridgestone/Firestone product and followed the rules he laid out. All these programs evolved over time, but Gamauf showed how a manufacturer could grow its dealer base and volume while also expanding its company-owned store count.

Icahn Automotive Group LLC appears to be trying to do the same thing with parts. It sold Federal-Mogul LLC to parts manufacturer Tenneco Inc. for money and stock in Tenneco. The group also owns the Auto Plus and Pep Boys-Manny, Moe & Jack parts distribution chains, and serves the end consumer through the various service outlets it has acquired, including Pep Boys, Just Brakes, AAMCO, Cottman and Precision Tune outlets and other tire dealers it has acquired.

Icahn’s mix of retail brands looks to me like a hodgepodge. I can’t imagine that Just Brakes, Precision Tune or AAMCO/Cottman do any sort of meaningful sales volume at retail. I think Icahn Automotive is better off acquiring the eight to 10 bay tire dealers and larger auto service facilities like its acquisitions of Advanced Auto & Tire in Phoenix and Mathis Tire in Memphis. I would not be surprised to see some of those other brands spun out again at some point.

If controlled distribution is part of the plan, it has to be a long-term play. Having experienced, high-volume tire and service operators running the stores is one key to success. Keeping that experienced team in place over many years is the next key toward continuous improvement. And investing in the business and new opportunities as they arise will help increase brand market share.