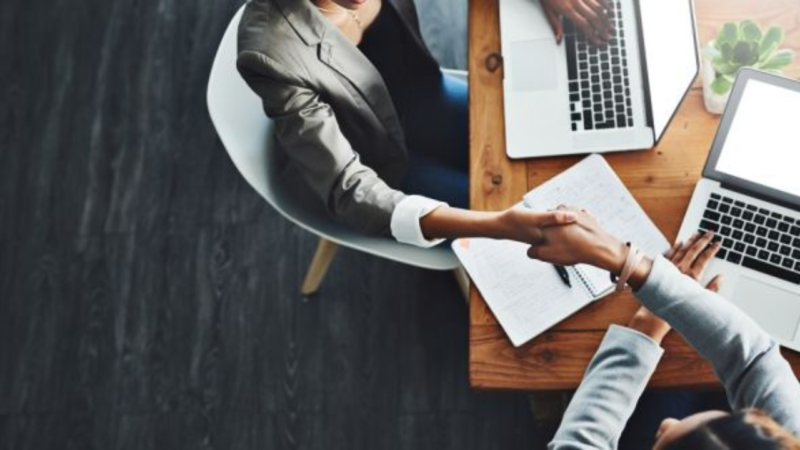 For the past several years, the managed service provider (MSP) industry has been rapidly consolidating, as private equity firms buy up small IT firms and cobble them together into larger platforms. But that process is evolving quickly, for two main reasons: there aren’t enough sellers of quality assets, and PE firms have shortened how long they hold their investments. That means they need to hunt for bigger game—and with a rifle, not a shotgun—before they cash out and exit.

That’s why our top prediction for the MSP market this year is this: It’s no longer simply a land grab, but a platform grab.  Look for article-after-article in Buyouts Magazine, PEHub, ChannelE2E, TechTarget, ChannelProNetworks, CRN, and Merger & Acquisitions Magazine (The Middle Market) to report on the transactions and trend.

The initial goal of most MSPs is to get to a level of EBITDA (earnings before interest, taxes, depreciation, and amortization) high enough to be acquired by a PE-backed platform. Now, the platform’s goal is to become an attractive target for an even bigger PE-backed platform, which can attract a much higher valuation.

“I can see some mergers of PE-backed platforms happening sooner rather than later,” says Rashaad Bajwa, President and CEO of Integris, an MSP platform. “If privately-held MSPs have successfully done the 1+1=3 arbitrage, why can't the PEs do the same thing at the next level of 3+3=9?”

But just because PE has a lot of money to throw around doesn’t mean they’re doing it blindly.

“In our view, a merger event is only a first step in a successful investment,” says Kyle Burke, a partner at ClearLight Partners, a PE investor in the ICS platform, which FOCUS helped put together last year. “We believe significant value is realized in integrating acquired MSPs and applying best practices across the broader business. This integration becomes a larger, and perhaps more challenging, activity to get right in a merger of equals.”

What’s driving the market toward more mergers of equals? In a word: Size. PE firms want larger MSP platforms, and they’re willing to pay a premium for them. And that’s because the usual time period PE firms hold their investments has shortened. In other words, PE firms are looking to cash out faster than they used to, and to get the most bang for their buck in the shortest period of time requires creating an even bigger platform.

That being the case, FOCUS advises large MSP platforms and their PE sponsors to seek similar-sized platforms to merge with in order to accelerate their path to exit and at a higher valuation. So far in 2021 FOCUS’s MSP Team has seen a 54% increase in our merger-of-equals advisory assignments; seven of the eight MSPs we advised on in new platform transactions involved mergers with peers. They did so to increase their combined marketability and valuation. We currently track 69 PE-backed MSP platforms and believe there are at least 10 more platforms seeking partners.

FOCUS is one of the most active investment banks in this industry. We’ve brought add-on acquisition opportunities to 55 MSP platforms and helped 11 founders become PE-backed platforms in a relatively short period of time. (Click here to read about the FOCUS’ MSP Team’s recent transactions.) 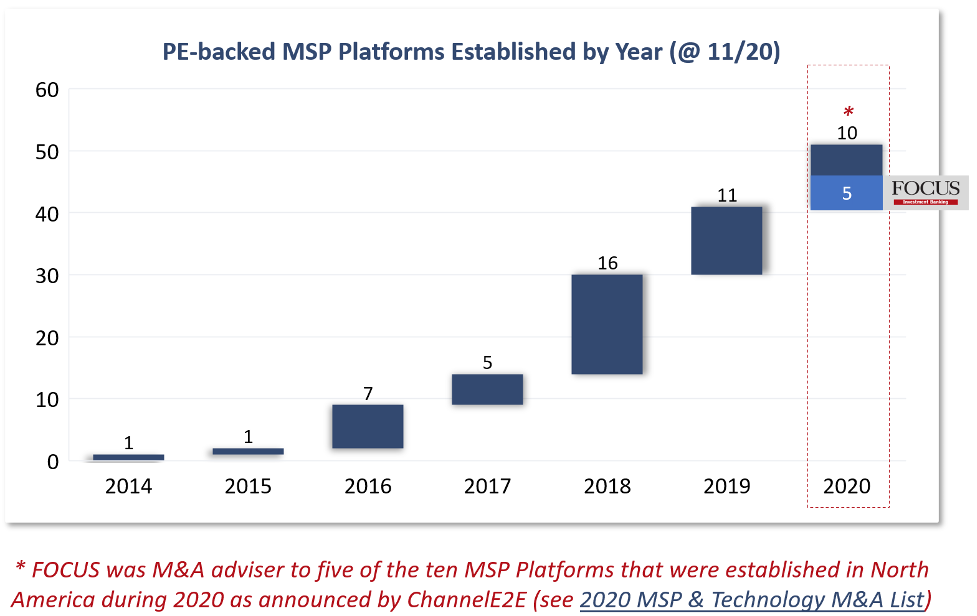 The initial goal of most MSPs is to get to a level of EBITDA (earnings before interest, taxes, depreciation, and amortization) high enough to be acquired by a PE-backed platform. Now, the platform’s goal is to become an attractive target for an even bigger PE-backed platform, which can attract a much higher valuation. 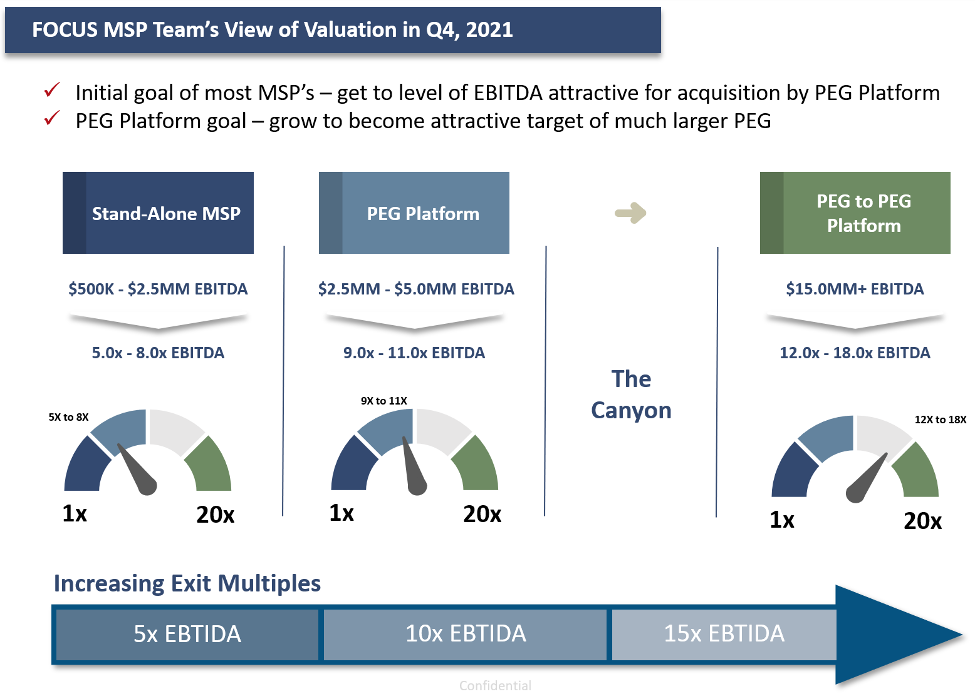 In the M&A market, larger companies generally attract a higher valuation than smaller firms, other things being equal. However, this discrepancy has become wider recently in the MSP sector.

One of the reasons is that PE firms are more eager to cash out their holdings earlier than before, so they have less time to earn money on their investments. According to PitchBook data, U.S. buyout firms' holding periods have fallen to 4.9 years so far in 2021 from 6.2 years in 2014.

We believe that nearly 80 PE-backed platforms are trying to grow EBITDA from the $2.5 million starting range to $15 million. Obviously, M&A is the quickest way to do that. But these platforms are not going to get to $15 million EBITDA by buying $500,000 to $1 million add-on targets.  They’re going to have to land bigger fish.

However, the problem is that there are simply too many buyers and not enough sellers of quality assets; the current ratio of buyers to sellers has been increasing over time and is now about 8 to 1. Therefore, MSPs need to be bigger to stand out.

“I think the PE groups have helped to tighten up the supply. They cleaned out much of the easy pickings from the peer groups, that’s for sure,” says Jon Labrum, founder and CEO of ProVelocity. “Everyone is going to have to get scrappier to keep finding the good companies to buy.”

The competition for new platforms has been fierce over the past two years and there is a very limited supply of platform-sized MSPs (in the $2.5 million to $5 million EBITDA range) seeking to partner with private equity groups.

“Growing by a merger-of-equals combination can work, especially if one or both of the companies are not growing as well organically or acquisitively as the original investment thesis laid out,” says Chris Jann, CEO of Medicus IT. “The growth and talent games are linked, and a merger-of-equals would bring great talent together to move the organizations forward faster.”

“When the pool of ‘equals’ runs out, the next best target is finding companies where the profit can be increased through the systems and processes of the larger platform,” adds Tom Andrulis, CEO of Intelligent Technical Solutions, Inc.

Looking ahead, then, we believe MSP mergers-of-equals will dominate PE activity in 2022, as well as conversations in investment committee meetings and at M&A summits.

Click here to learn more about MSPs at ChannelE2E.