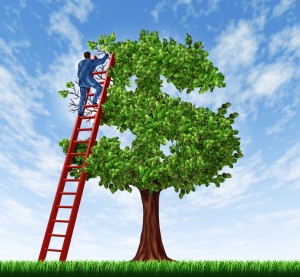 2015 FactSet statistics show that large M&A transactions had higher value multiples than small deals—and the premium is about 30 percent. Median EV/EBITDA multiples for deals exceeding $250 million approximated 12.4x, while the ratio for middle-market transactions was 9.5x. This phenomenon of higher multiples for larger deals has been persistent over time. 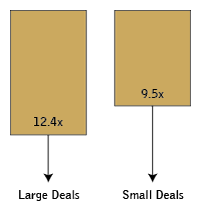 Why does the differential persist? To begin, acquirers believe small deals are riskier than large ones. Small companies tend to have less product diversification, to lack management depth, and to tolerate more customer concentration, among other concerns. To compensate, an acquirer demands a greater projected return-on-investment, all things being equal.

Compounding the situation for middle-market company owners is the law of “supply and demand.” The supply of small firms for sale is greater than that of large enterprises. As a result, the value multiples of small deals get pushed down, relative to bigger transactions.

As one illustration, consider the public trading prices of professional service contractors to the federal government. Firms with over $1 billion in market capitalization traded at a median EV/EBITDA ratio of 9.3x in November 2015. Smaller companies traded at a 7.6x median, a negative difference of 22 percent.

Over the last two years, M&A deals in that sector for which information was available, showed a negative difference of 10 percent between large and small transactions.

As another example, for the mobile solutions industry, the negative differences were 38 percent and 11 percent, respectively, in November 2015.

FOCUS consistently observes this disparity in its own advisory work, and we often remind business owners that attaining a premium value multiple relies, in part, on the operation achieving a particular size.

When considering the M&A process, middle market corporate owners—be they buyers or sellers—need to remember this dynamic and to approach deal pricing accordingly.