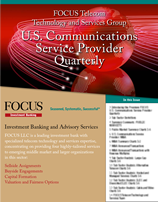 In public markets, the past three months was tough on the public markets generally, and the FOCUS Communications Service Provider Index (CSPI) was unfortunately not able to buck the overall negative trend. The only silver lining was that the 7.5% drop in the CSPI for our winter reporting period compared favorably to both the 14.0% drop in the S&P 500 and the 17.5% drop in the NASDAQ. The CSPI remains down for the full year period with a year-over-year loss of 12.1%. After this period’s reverses, the broader indices joined the CSPI in negative territory for the year. The S&P 500 was down 6.2% over the past 12 months, while the NASDAQ was down 3.9%. Sector multiples are down compared to this time a year ago, although the declines were relatively modest. The sector revenue multiple dipped from 2.5x to 2.4x, while the sector EBITDA multiple dropped from 7.7x to 7.3x.

In order to better serve your needs and answer your questions, please complete the following survey. * Required fields.
SHARE THIS