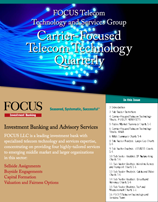 In public markets, the FOCUS Carrier-Focused Telecom Technology Index (CFTTI) had a second straight reporting period in negative territory with a three-month loss of 7.9%. This was despite strong positive returns in the broader indices of 6.3% in the S&P 500 and 6.8% in the NASDAQ. The loss this period was enough to put the CFTTI into negative territory for the full year period with a year-over-year loss of 1.3%. This performance was worse than the 0.9% gain in the S&P 500 over the corresponding time frame but slightly better than the 1.8% drop in the NASDAQ. Sector multiples are lower than they were at this same time last year. The sector revenue multiple fell from 2.4x to 2.2x, while the sector EBITDA multiple dropped from 15.0x to 12.0x.   DOWNLOAD