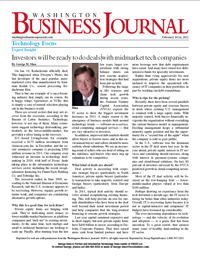 That is but on example of a once-booming industry that simply ran its course. Be it buggy whips, typewriters or VCRs, this is simply a case of natural selection playing out in the business world.

There are several sectors that may not recover from the recession, according to the Bureau of Labor Statistics. Technology, however, is not one of them. Many economists suggest technology deal-making, particularly in the lower-middle-market, has provided a silver lining in the recovery.

Download the PDF here to read more:  Investors will be ready to do deals with midmarket tech companies